Collection items are slowly being added to the collection search page and I include below some recent additions from an extensive family album. These include photographs that demonstrate the links between three Brisbane families: the Donaldson, Mitchells and Laughtons.

There are two branches of Brisbane Donaldsons descended from the same family: one branch arrived from Scotland and settled around Bulimba prior to the First World War (see Balmoral Cemetery: A family history outing); the other arrived in Brisbane via South Australia, New South Wales and Victoria after the war. (see The Don: Major Robert Johnstone Donaldson DSO). It is this second branch that we are concerned with below.

The Mitchell and Laughton families require a little more research, although I can say that the Laughtons spent time in British India, and in London, before coming to Australia. The photographs below, and in a related set of images recently added to the collection (see ) begin to tell these family stories.

This series of family photographs were taken at Alma St, Clayfield, Brisbane. They include three generations of the Mitchell family in Brisbane, including a great group portrait of the entire clan in about 1919. 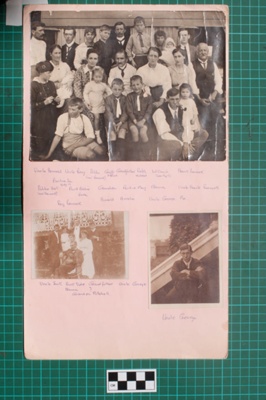 About this objectThree photographs mounted on a pale pink foolscap card with handwritten annotations in blue ink below. Described from top to bottom, left to right.

Bottom Right: Photograph of Uncle George (George Henry Connford Mitchell Jan 1889 - 1975) seated on a reversed chair in front of the stairs of Alma St Clayfield, arms folded on the chair back.

About this objectSix photographs mounted on a pale pink foolscap card with handwritten annotations in blue ink below. Described from top to bottom, left to right.

Middle Right: Lily Peacock (married Arthur Unwin) reclining in a deck chair with a pillow behind her head.

Bottom Right: Uncle George (George Henry Cornford Mitchell Jan 1889 - 1975) and Aunt Dide on the steps of Alma St Clayfield. George leaning on the railing with hands in pockets and Aunt Dide holding a book in both hands.

Two images of the engagement and marriage of Gwenda Elizabeth Laughton and Robert Johnstone Donaldson, my paternal grandparents, who were married at the Catholic Apostolic Church on Manning Street, South Brisbane, in 1940-41. 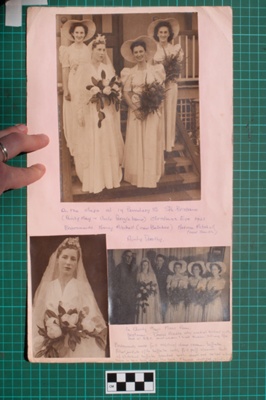 About this objectThree photographs mounted on a pale pink foolscap card with handwritten annotations in blue ink below. Described from top to bottom, left to right.

Top: A photograph of Gwenda Elizabeth Laughton (06 Nov 1915 - 26 Aug 2010 - bottom left) on her wedding day with her bridesmaids, Nancy (back left) and Norma Mitchell (back right) and her sister, Dorothy Laughton (front Right). The four are standing on the steps of a house, said to be 19 Boundary Street South Brisbane, the home of May (Sarah May Bradley Mitchell Jan 1877 - 16 Feb 1956) and Percy (Alfred William Percival Mitchell Jul 1880 - 27 Oct 1958) Mitchell (siblings - neither ever married). The house is no longer standing and its location is currently (2015) a carpark near to the Brisbane "Go-Between" bridge complex. Bridesmaids are dressed in white gowns with flounced shoulders and sun-hats. The bride wears a tiara and veil with long white gloves and you can make out a pearl crucifix on her neck.

Bottom Left: photograph of Gwenda Elizabeth Laughton on her wedding day. She wears a tiara of flowers with a long veil and a pearl crucifix around her neck. Her dress is in white and she holds a bunch of white flowers.

Bottom Right: In Aunty May's Music Room. Best man David ADdis who was at school with Dad at B.B.C. and whom I had known all my life.
Bridesmaids wore full skirts of deep cream taffeta, fitted jackets of the taffeta with full puff sleeves. Hats of stitched taffeta banded with dark red velvet w[...] hung in long tails down the back. Flowers dark red gladiolli.

About this objectOne photograph and two newspaper clippings mounted on a pale pink foolscap card with handwritten annotations in blue ink below. Described from top to bottom, left to right.

Top: A photograph of Gwenda Elizabeth Laughton (06 Nov 1915 - 26 Aug 2010) and Robert Johnstone Donaldson (10 Oct 1910 - 1992) on the occasion of their engagement in September 1940. Gwenda wears a long sleeved dark-coloured blouse with a triple string of pearls. Robert wears glasses and a pinstrip suit and tie. The photograph is stamped "Norton-Trevaire Studios".

Bottom Left: A clipping describing the Donaldson-Laughton wedding from the Brisbane Telegraph, Wednesday 24 December 1941. The text reads: "Weddings
Donaldson — Laughton A necklet of pearls and a pearl cross, given by her father to her mother on their wedding day, will be worn by Miss Gwenda Elizabeth Laughton when her marriage to Trooper Robert Johnstone Donaldson. A.I.F.. is solemnised this evening in the Catholic Apostolic Church. Manning Street, South Brisbane. The bride's ankle-length gown of ice white satin is finished by a wing train fall-ing from the shoulders, and the bodice is draped to a shirred waistline. A posy of Stephanotis will hold in place her veil of handmade Honiton lace, which is 100 years old. Magnolias will compose her sheaf bou- quet. Elder daughter of Mr. and Mrs. K. H. Laughton, Clayfield, she will be given away by her father. Her three bridesmaids will be her sister Dorothy and her cousins, Misses Norma and Nancy Mitchell, who will be frocked in deep cream taffeta. Mr. David Addis will be best man for the bridegroom, who is the second son of Mr. and Mrs. R. J. Donaldson, Hendra. Mr. H. J. Foxall will officiate."