New Laughton and Man Family photographs have been added to the collection search page.

These new photographs include images from the Laughton family’s time in India and Myanmar (Burma) prior to Kenneth Laughton coming to Australia. They also include images of the family generation of the Man family which ended with Edward Horace Man.

The Laughton and Man families, both members of the British military community in India, were joined in the mid 19th century with the marriage of Arthur Frederick Laughton to Georgiana Emily Man. In 1869, Colonel Henry Stuart Man was the Superintendent of Port Blair, a penal settlement in the Andaman and Nicobar Islands and Captain Arthur Frederick Laughton was his Executive Commissariat Officer . At some point in 1869 Laughton married Man’s daughter, Georgianna and their eldest son, Herbert Furnell Laughton, was born their and baptized in the newly consecrated church (see the images from “Page 2”, below, for this story).

The dating of these images requires some further research to set them fully into the narrative of the Laughtons in India and the East but already it is possible to trace the family through images to modern day India, Burma and Pakistan. On the topic of authorship, it is assumed at this stage that the photographs were all taken by Arthur Frederick Laughton, although further research is required.

The Photographs – Laughton and Man Families

Some further images from Myanmar and India from the Laughton family archive. 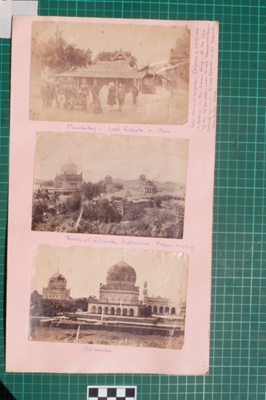 About this objectThree photographs mounted on a pale pink foolscap card with handwritten annotations in blue ink below. Described from top to bottom, left to right. Top: Group of soldiers in foront of a house in Mandalay, Burma. Lord Roberts is said to be seated on the chair. A note in Ian Donaldson's hand reads: "Arthur Frederick Laughton (G. Father of GED) was a Colonel in the Indian Army. At the time of the Afghanistan Wars he was 'Commiseriat General' (probably now W.O.) to Lord Roberts in his Kabul to Kandahar March. "; Middle: Tombs at Golconda, Hyderabad in Nizam's territory. Several tombs are shown with dense foliage in the foreground. Also known as Golkonda or Golla Konda, this citadel in southern India dates to the Qutb Shahi dynasty (1518-1687). The Tombs are north of the city wall and consist of stone-built sepulchres set amidst landscaped gardens; Bottom: Structures at Golconda with a palm grove to the left and what appears to be a minaret in the background on the right. 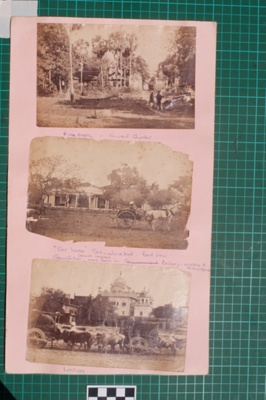 About this objectThree photographs mounted on a pale pink foolscap card with handwritten annotations in blue ink below. Described from top to bottom, left to right. Top: Ama Poora - Ancient Capital. Two men stand on an overgrown road leading to a stone gate. Buildings can be seen under trees in the background with palms lining the road. Today known as Amarapura (city of immortality), the city was a capital of Burma/Myanmar and is located near Mandalay on the Irrawaddy river. The city was the capital from 1783-1821 and 1842-1859, during the Konbaung period. Much of the city was dismantled for materials after 1857 when King Mindon was constructing Mandalay as his new capital; Middle: A low-set whitewashed house with a collondaded porch sits among trees with a horse and buggy in the foreground. This is described as "Our house" presumably that of Arthur Frederick Laughton () in Secunderabad, as viewed from the back. A note says that Grandfather (Kennth Laughton ) was born in [Secunderabad] (struck out) Bellary - according to birth certificate. Secunderabad was founded in 1806 as a city to house British personell and was the twin of Nizam's existing Hyderabad; Bottom: A large building in the background with several teams of bullocks hauling wagons int he foreground. Said to be Lahore, part of modern Pakistan.

These pages include various portraits of the Man and Laughton Families and some of their branches. They also include some important portraits of Amy Man and Edward Horace Man from their house at Brighton.

About this objectFour photographs mounted on a pale pink foolscap card with handwritten annotations in blue ink below. Described from top to bottom, left to right. Top Left: Great Aunt Amy Man (Amy Frances Man b: 1855 d: 21 Jan 1936) - Grannie Laughton's (Georgianna Emily Man b: 28 Feb 1849 d: 30 Nov 1927) sister seated in a chair with book in hand and a dog at her feet. Probably taken at St Helens at Brighton. Top Right: Originally annotated as Uncle Horace (which is certainly is not) this was struck out and replaced with Walter Lenthall (see item 6.11.2) whose name appears in the bottom left corner, dated 16/4/15. Ann Man (Ann Man b: 11 Aug 1810), daughter of Henry Man (Henry Man b: 14 Jan 1784 d: 4 Mar 1847) and Elizabeth Thompson (Elizabeth Thompson b: 10 December 1788 d: 04 Mar 1847) married a Lenthall and had a daughter, Katie, who wrote a 7 page 'Story of Man' tracing the early history of the Man family as related by Ann Man; Bottom Left: Aunt Gwen Atkinson (Gwendolen Edith Muriel Laughton b: April 1890 d: 6.12.1957) and Uncle Archie (no details, but see below) on their wedding day. A note records: 'Archibald John Buchanan Atkinson [and] Gwendoline E Margaret laughton married [at] St John's Preston Park, brighton, 18.11.22.'; Bottom Right: A group photo dated August 1950 and recorded as a Christening Party. The label is muddled and hard to pinpoint who is who, but the people listed are: Angus James Buchanan Husband (otherwise unknown - appears to be the baby), Aunt Gwen (Gwendolen Edith Muriel Laughton b: April 1890 d: 6.12.1957), Uncle Archie (no details, but see above), Gt G'mother Atkinson (otherwise unknown), June (daughter of Gwen and Archie); Angus (crossed out) replaced with Christine (daughter of Gwen and Archie), David Husband (otherwise unknown), Derek Atkinson (son of Gwen and Archie). 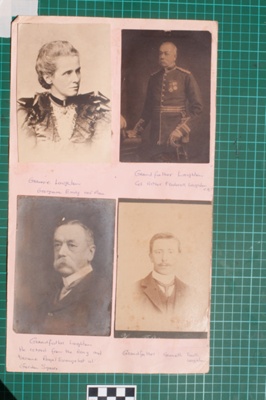 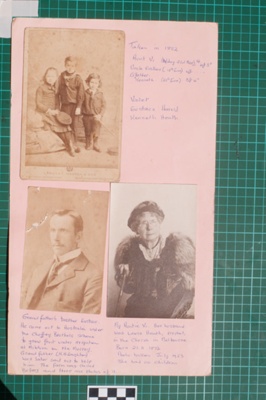 About this objectThree photographs mounted on a pale pink foolscap card with handwritten annotations in blue ink below. Described from top to bottom, left to right. Top: Said to have been taken in 1882. Studio portrait of Aunty Vi (b/day 21st Nov) Ht 4 ft 3", Uncle Eustace (15th June) 4 ft, G'father Kenneth (25th June) 3ft 4". Additionally annotated: Violet (Violet Evelyn Laughton b: 21/11/1872), Eustace Harold (ustace Harold Laughton b: 15 Jun 1875 d: 3 7 1936), Kenneth Heath (Kenneth Heath Laughton b: 1879 d: 29 Mar 1957). Photograph by Lambert Weston and Son photographers, Waterloo Cr Dover and Sandgate Road Folksestone; Bottom Left: Portrait of Eustace (), annotated: 'Gradfather's brother Eustace. He came out to Australia under the Chaffey Brothers' scheme to grow fruit under irrigation at Mildura on the Burray. Gradfather (K.H. Laughton) was later sent out to help him. The farm was called Bellary and there are photos of it.' Eustace was born at Bellary in India in 1875; Bottom Right: Portrait of Auntie Violet (Violet Evelyn Laughton b: 21/11/1872) taken in July 1953. The annotation reads: 'My Auntie Vi. Her hsuband was Lewis Heath (Charles Edward Lewis Heath), prophet, in the Church in Melbourne. Born 21.11.1872. Photo taken July 1953. She had no children.' A prophet is a member of the clergy in the Catholic Apostolic Church. 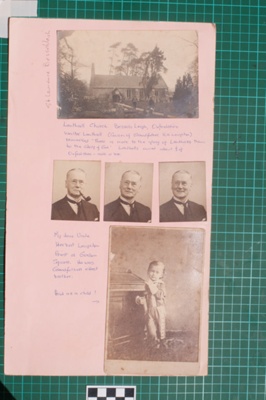 About this objectFive photographs mounted on a pale pink foolscap card with handwritten annotations in blue ink below. Described from top to bottom, left to right. Top: St Lawrence Church Besselsleigh, Oxfordshire. Described here as the Lenthall Church, a note records: 'Walter Lenthall (see item 6.10.1) (cousin of grandfather, K.H. Laughton) remarked "There is more to the glory of Lenthalls than to the Glory of God." Lenthalls owned about 1/2 of Oxfordshire - more or less.' The church still stands today and was originally founded in the 12th century. The Lenthalls have an association with the church going back to at least 1632 when William Lenthall beautified and repaired the church. It is a Grade 2 listed building; Middle (set of 3 portraits): Three portraits of Uncle Herbert Laughton (Herbert Furnell Laughton b: 1 October 1869 d: 1954) who was priest at Gordon Square. He was grandfather's eldest brother; Bottom: Uncle Herbert (above) as a child, holding on to the leg of some furniture. 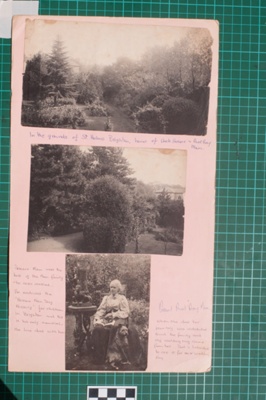 About this objectThree photographs mounted on a pale pink foolscap card with handwritten annotations in blue ink below. Described from top to bottom, left to right. Top and Middle: Two landscapes of the gardens at St Helens in Brighton, where Uncle Horace Man () and Aunt Amy Man () lived; Bottom: Great Aunt Amy Man () seated in a garden holding a book with a dog at her feet. A carved Burmese table is to her right. A note reads: 'When she (aunt Amy) died her jewellery was distributed round the family and my (Gwenda Elizabeth Laughton) wedding ring came from her. Dad (Robert Johnstone Donaldson) and I decided to use it for out wedding ring.' A further note to the left of this photo reads: ' Horace Man was the last of the Man family - he never married. He endowed the "Horace Man Day Nursery" for children in Brighton and this is his only memorial - the line died with him.' 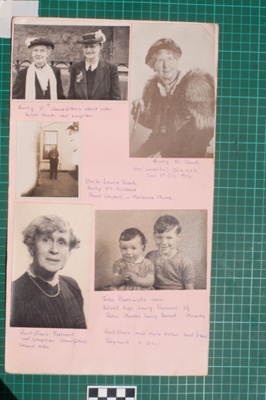