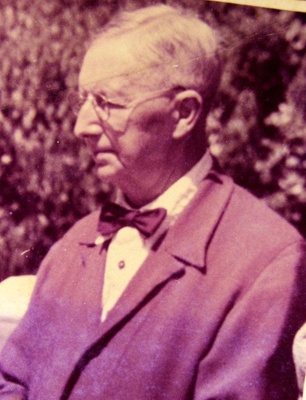 Major Robert Johnstone Donaldson, DSO, was the commanding officer of the 11th Field Company Engineers, AIF, for the duration of the First World War. He was mentioned in dispatches three times and awarded the Distinguished Service Order for his work reorganising the trenches around Ypres during the Battle of Passchendaele. Despite this impressive service record, at the beginning of 2012 his descendants knew of only one image of his time in the army, now held in the Australian War Memorial (A03546).

But while investigating the Australian War Memorial archives for materials related to the 11th Field Company Engineers, I uncovered a reference to a non-digitised caricature by the company’s itinerant artist, Sapper Louis Vasco. The work, entitled ‘Don’, is listed as a caricature of an unknown officer, but putting two and two together it I surmised that this unattributed drawing must surely be of Vasco’s CO, Major Donaldson.

Further investigation uncovered many documents about Vasco and his prolific caricature works which are found all over the world. Thanks to the help of those at the Vasco Research Blog and The Vasco Club, who hold copies of the caricatures, the hunch was proved correct and we can now correctly attribute the caricature’s subject to Major Donaldson.

In this little piece we can see that Major Donaldson has since grown a healthy mustache (and it seems a little more hair!). Remarkably, the two images are nearly identical in aspect, probably chosen to emphasise the Major’s prominent nose. In the caricature, the Major wears a greatcoat (still retained by the Donaldson family) and with gloves and riding crop. As further evidence, Major Donaldson appears at least once in the unit’s war history as mounted in the course of his duties, and just visible on his shoulder is a stylised crown, signifying his rank and the oval colour patch of the company.

This discovery is relatively minor, but really demonstrates the sorts of information a little bit of digging can uncover. The next step in the process will be to tell the War Memorial about these findings and to add another piece to the story of the Company, its CO and Sapper Vasco. But more than that, the family itself now has another image of Major Donaldson which will be added to the fabric of stories already remembered and told about him to future generations.

Last minute edit: In going through my grandmother’s papers and photographs, my father recently found a lovely picture of Robert Johnstone Donaldson only a few years before his death in 1954 (my father dates the image to be c. 1950). Taken from the same angle as our previous images, I think it makes a fitting end to this post on the photographic history of this interesting man. You can find it in the “Collection Items” section below.

Who knows what other images might be forthcoming in our continued sorting of this material? Already we have an archive of several hundred photographs and images, just waiting to be researched – stay tuned for more next time!