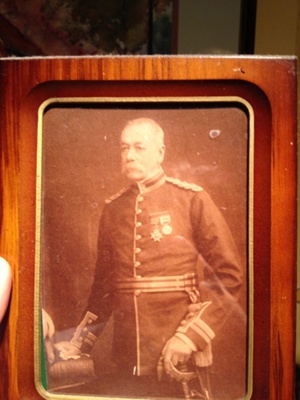 About this objectPhotograph of Col. AF Laughton CB in frame. The subject wears the regalia of the military order of the Companion of the Order of the Bath. 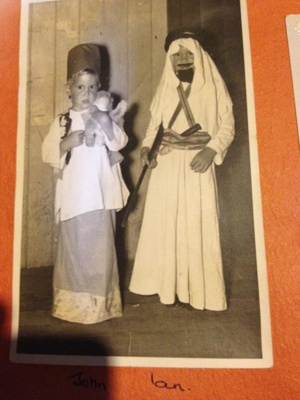 About this objectPhotograph of two children of R and G Donaldson in fancy dress.

This man is Lt. Col. Arthur Frederick Laughton, C.B. and he is my second great grand father.

In a direct line to myself, his descendants can be summarised as:

By 1861, Arthur Frederick was a 21 year old Lieutenant with the British Army, living in London with his father (Chief Surgeon of the East India Company) and two sisters. They also had a cook and parlourmaid and lived at 10 Ladbroke Place East in the Parish of St Mary Abbotts, Kensington. Today, this is the southern end of Ladbroke Grove, situated between Ladbroke Square and Ladbroke Road. (Interestingly, some 150 years later AF Laughton’s great great grandson, Anthony lived at the other end of this street – I have fond memories of staying at his house there in 2009). This was an area of growth and development at the time, not popular among the richest Londoners, but not a cheap area either.

He had joined the India Civil Service in 1857 after completing his education at St Paul’s school, Calcutta and Darjeeling, a second tier boarding school known for being the highest school in the world for the time. In 1869, he married Georgianna Emily Man, the eldest daughter of General Henry Man.

His army service was not as a rank and file officer, but rather as an interpreter, surely a sought after skill in the mid 19th century. In this capacity he served in the Madras 18th Infantry; the 3rd Palamcottah Light Infantry and the 66th Foot. He served in the Madras police in 1883 and the Commissariat Department from 1863 – 1888. During his time with the Commissariat, he served in the 1879 – 80 Afghan Campaign and was the principal comissariat officer in the 3rd Burmese War (1885 – 88), which removed the last Burmese sovereign, Thibaw. For his service, he received the India General Service Medal with two clasps (visible in the right of the photograph). These would probably have been the Burma 1885 – 1887 and Burma 1887 – 1889. He was mentioned in dispatches twice, but at least eight mentions of him can be found in the London Gazette. Much of this material is found in the Indian Biographical Dictionary – a wonderful source that is also available online .

These source paint a picture of a speedy and well run campaign under Lt. General Sir H Prendergast that captured the entirety of Upper Burma with very little loss. In reality, the campaign could hardly have been easier as the entire Burmese governmental structure had been under significant strain for years . Nevertheless, AF Laughton is given an honourable mention for his ‘efficiency… under circumstances of considerable difficulty’ in organising the commissariat department . For this service he was appointed to be an Ordinary Member of the Military Division of the Third Class, in the Most Honourable Order of the Bath (C.B.) . His great-grandchildren later used his belt from this official regalia as a dress-up prop!

In 1887, Lt Col Laughton was promoted to full Colonel and in issue 25735 of the London Gazette, also in 1887, we find mention of why the conditions proved so difficult . In attempting to subdue the countryside, a matter which took several years, the British army of over 40,000 troops was dispersed over the countryside of upper Burma . This of course necessitated a complex system of supply to ensure the men remained fed and equipped, described as the most important of the campaign. The last article, dated 29 June 1889 from the India Office, notes that Colonel Arthur Frederick Laughton, C.B. Madras Staff Corps was permitted by the Queen to retire from the service . He was in his 59th year.

This is only part of the story of Col. AF Laughton and there will be more to come in the future, including features on objects and images from his time in Burma, still held by the family. If you have anything relating to Col Laughton, please do send me a message and I will try to arrange a time to come and see it. Once he left the military, the story of AF Laughton changes dramatically, but you will have to come back again to see how he is connected to a small oil lamp now hanging in an Anglican church in Brisbane, Australia!