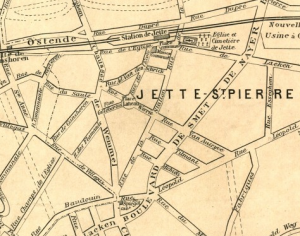 A quick post this week, also from the RJ Donaldson postcard collection. An interesting class of cards, including the Sergeant’s Mess card, concern individuals or groups, sometimes named on the reverse and probably intended to be keepsakes. Like the Sergeant’s Mess, this card dates to the very end of the war, the 24th of January 1919, while the unit was still located in Bernapre. There is no indication in the unit diary to suggest anything further about this date. Major Donaldson was not signing off on the day reports, but does seem to have been with the unit as no leave is recorded in his permanent record.

On the obverse is a full-length photograph of a French or Belgian soldier in full uniform. At his collar and on his cap are insignia of a rampant lion, indicating that he was a translator. His uniform is actually Commonwealth and a colleague currently working with King’s College London noted that in 1915 the British donated uniforms to the beleaguered Belgian army in France. On his sleeve is a mark of rank – one thick and one thin stripe, probably showing that he was a Corporal.  The card is signed on the back with the following text:

The signature is difficult, and my transcription may well be wrong. Further research is necessary into the Belgian and French military archives from WW1 to provide more information on his identity, but it is possible to identify the address. The location no longer exists under this name, but thanks to assistance from librarians in the Map Room of the Belgian Royal Library, it is possible to identify Rue de la Station (see the map to the left, showing the street as it appeared in 1910) as Rue Léon Théodor in the Brussels suburb of Jette. The station from whence the street gets its name still exists today at the end of the street and a vintage postcard (here) attests its location. Unfortunately, the house at 108 no longer exists as it did in 1919 (it has been replaced by a modern steel and glass structure) but we can hypothesise its location using Google Maps.

Cpl. Hennaut must therefore have been a translator, attached to the unit in order to facilitate their work in France and Belgium, particularly in the period after the armistice when they spent most of their time billeted in small French villages. In this post-armistice period, the men were kept busy with a routine of courses and route marches, football matches and concerts. These included daily lessons in French and I assume that Cpl. Hennaut would have led these gatherings.

Whether or not the two men remained in touch, I do not know – perhaps another in the family has some bit of family history passed down that is jogged by this post – please share below if you do. I would be particularly interested to hear if anyone knows if Major Donaldson spoke French! I will continue to research Cpl. Hennaut’s war service and report back if I find anything further.